Traveling with young children is hard work.  When Noah was 5 and Lily was 2, I realized that in just 3 years we could go on some real vacations.

Nathan nicknamed our family of four T4 and convinced the kids (and sometimes me) that we were adventurers.  When the kids were little we took small trips to the woods to hike and campgrounds to explore.  Finally the time came when Noah was 8 and Lily was 5, so we set out on the grandest of all adventures to the Grand Canyon.  That trip in 2010 has remained Nathan’s all-time favorite family vacation.

We traveled to the Grand Canyon by car and stopped at a hot springs in Colorado and hiked Arches National Park on our route to Arizona.  On March 29, 2010, we arrived at Mather campground on the south rim, and I fell in love with the Grand Canyon:  the pine smell, the breathtaking views, the gift shop of all gift ships.

We camped for 3 nights and hiked a small distance down the Bright Angel Trail.  During our short hike with two young children, I saw a family with two teenage daughters and huge packs hiking out of the canyon.  Nathan explained that the family probably spent the night at Phantom Ranch at the bottom of the canyon.  I was inspired and declared, “T4 must come back the summer before Noah is a senior and Lily is a freshmen and hike to Phantom Ranch!”  I figured by then that Lily would probably be able to keep up with the rest of us.  My truly adventurous husband agreed wholeheartedly.

But come on…this was 2010…that was going to be a lifetime away.  Would we even remember?  In the meantime T4 adventured in New York City, Washington D.C., Miami, The Outer Banks, San Diego, Los Angeles, San Francisco, Leadville, Mexico, Canada, and Puerto Rico.  We have hiked, camped, climbed a 14er, and fallen in love with many beaches.

8 years have passed and somehow Noah will be a senior and Lily will be a freshman this year.  So we headed back to the Grand Canyon.  We brought our beloved friend Liza.  We stopped at Glenwood Spring, Colorado, and enjoyed glorious (although somewhat cult-like) hot springs.  We hiked to the Delicate Arch at Arches National Park.  Then we set up camp at Mather campground with the same wonderful pine smell, breathtaking views, and the best gift shop ever.  We were joined by more beloved friends Alex, Mike, and the entire Wainwright clan.

On June 12, 2018, we woke up at 4:00 a.m. and headed down the Bright Angel Trail.  Spirits were high during the decent.  The trail starts with seemingly never-ending switchbacks which lead into the shady Indian Garden.  We stopped for snacks, water, and shade.  After Indian Garden we were exposed to the midday sun and surrounded by jagged rocks.  I nicknamed this section Mordor and tried to quote The Lord of the Rings as we suffered through increasing heat.

We left Mordor and heard the roar of the Colorado River.  Noah, Nathan, Mike, and I hiked down to the river and stepped into the icy water.  The view of the river and surrounding cliffs looked like a movie set of paradise.  Noah asked, “Are we still on earth?”

Alex, Mike, and Liza set up camp by the creek.  T4 continued to Phantom Ranch in the oppressive heat.  The temperature in the shade was 110 degrees, and the thermometer stopped at 140 degrees in the sun.  The hike to Phantom Ranch took 4 hours and 15 minutes and left us dusty, sweaty, and parched.

T4 had reserved bunk-room spots at Phantom Ranch 13 months prior to the trip.  Nathan and Noah stayed in bunk-room 13, and Lily and I were in bunk-room 15.  The bunk-rooms had 7 bunk-beds and were air conditioned.  We felt bad for our friends at the hotter than Mordor campground.

Phantom Ranch has a canteen where we enjoyed cold beverages and card games but mostly air conditioning.  After a gourmet dinner of ramen noodles and instant mashed potatoes, we all headed off to bed at 9:00 p.m.  We set our alarms for 4:00 a.m. with the goal of heading out of the canyon by 5:00 a.m.  Mike and Nathan estimated that the hike out of the canyon would take 7-9 hours.  I must admit that I was a little nervous that night.

Morning came quickly and we set out with the packs a little lighter after eating another gourmet meal of Pop-tarts and uncooked oatmeal.  Lily set a brisk pace and led the way through the riverside and up Mordor.  Mordor seemed almost friendly in the shade, and we made it to Indian Garden in record time.  After a stop for snacks and water, we started up the dreaded switchbacks.  There are two water stations after Indian Garden:  at mile 3 and mile 1.5.  At the first stop Lily ran to refill our water bottles and wet our bandannas.  Noah took Liza’s pack for the final 3 miles of switchbacks.

The final 1.5 miles, Lily and Mike set out first followed by Nathan and Noah. Alex, Liza, and I brought up the rear.

We reached the arch near the top and stopped for a victorious group photo.  We climbed out of the canyon in 5 hours and 45 minutes which exceeded all of our expectations.

We rewarded ourselves with double scoops of ice cream.  As we ate ice cream, Nathan asked for our high of the experience.  We all agreed that the accomplishment of the hike out was our main high.  Some of my favorite other highs:

Lily did more than keep up with us—she led us on the hike and made it look effortless.  Nathan now has a new favorite family vacation—T4’s 2018 Grand Canyon Adventure.  We made the accomplishment even sweeter by including friends.

Nathan was really onto something all those years ago.  He took his adventurous spirit and made adventurers out of all of us.  We have two teenagers who climbed out of the Grand Canyon—one leading the way and one carrying a pack for a friend–and both without complaint.

Until the next adventure… 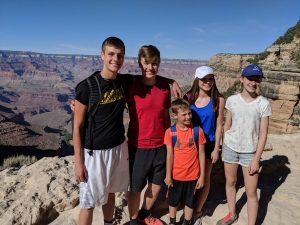 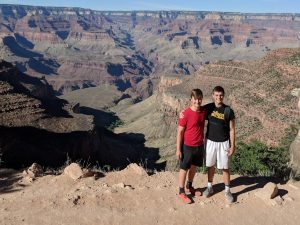 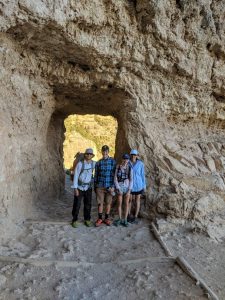 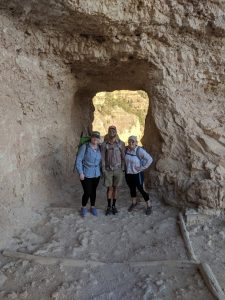 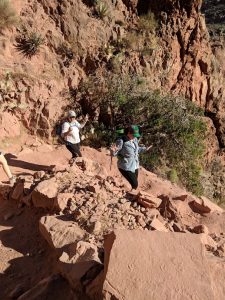 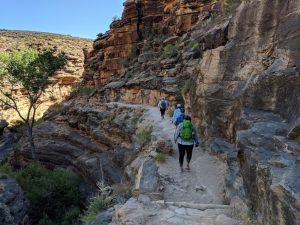 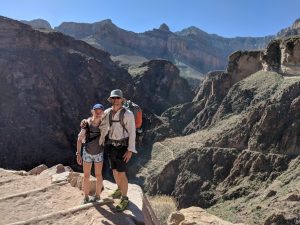 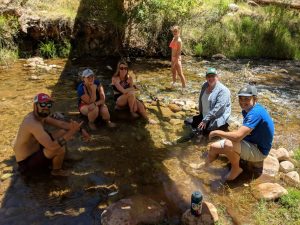 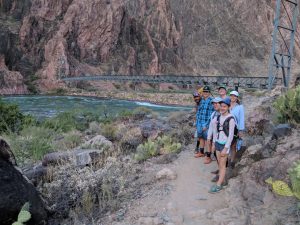 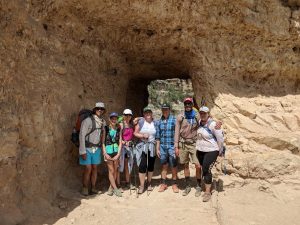 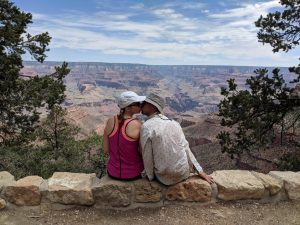 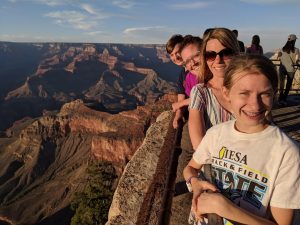 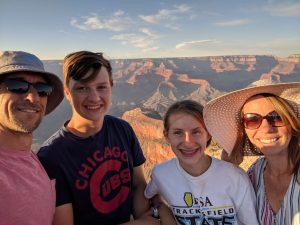 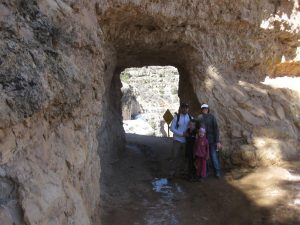 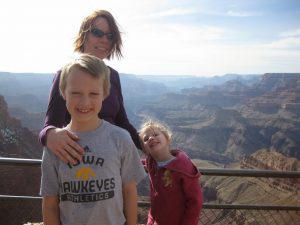 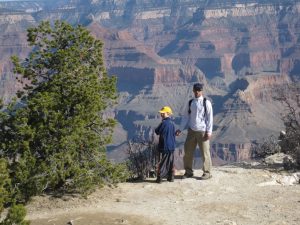 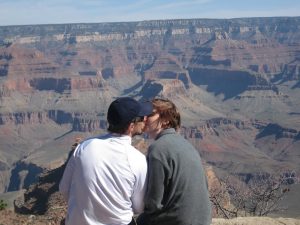 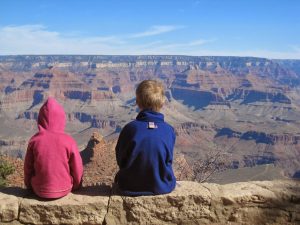 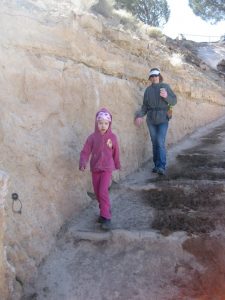 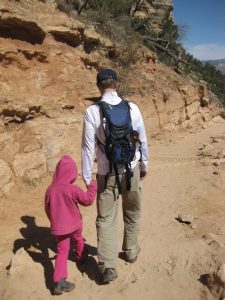 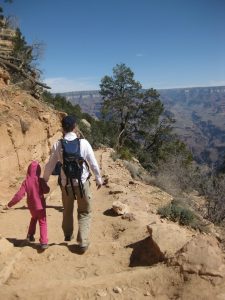 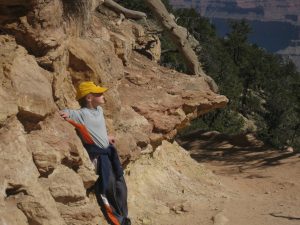 One thought on “The Origin of T4 and The Grandest Adventure”